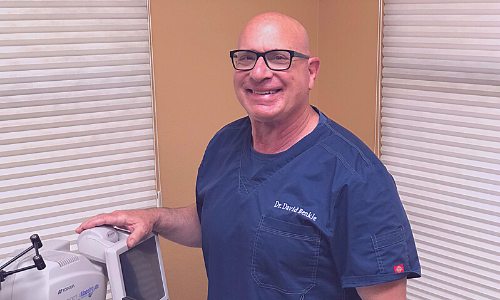 Patients coming into any medical office must prepare themselves for a new reality due to the COVID-19 pandemic.

Wearing a mask, possibly waiting in a car before being called in and keeping a social distance from others is all part of that new world.

Dr. David Benkle has two optical practices in Stockton, California. Downtown Optometry is located in the city’s business area and another office is in the north part of the city. The two demographics have made his practice more interesting and rewarding because he is able to help patients across the entire economic spectrum. He had to close his practice's doors for eight weeks from March 16-May 12.

Once the doors were opened back up, it took a while for his patients to get used to the new requirements.

"I'm not going to lie, the first week was a bit of a challenge," Dr. Benkle said. "At my downtown location, I used to have a lot of walk-in traffic. People would come in and look at glasses or get prescriptions filled. We couldn't do that anymore. We had to start taking temperatures before people came in and did some screenings.

"We're in a groove now. Even though we're seeing fewer patients, it's become a little more stressful for them and us."

Adjusting to A New Reality

While he was closed, Dr. Benkle had a locksmith install a lock system that allows his employees to buzz people in instead of allowing them to walk into the building on their own. He also installed protective fixtures in his office to shield his employees from patients in certain situations.

"Most of our patients know that we have a mandatory mask policy. I'm not letting anybody in here without a mask," Dr. Benkle said, frankly. "I'm seeing as many patients as I can. You can't have 20 people in your waiting room anymore. I know my patient numbers are down, and my revenue is down, but I was able to bring my staff back and open back up. That's something."

One of the hardest things Dr. Benkle and his employees have had to adjust to is cleaning frames anytime a customer touches one, even if they're wearing a mask. This includes cleaning the frames with hydrogen peroxide and water.

"We got that recommendation from our frame companies," Dr. Benkle said. "We have a clean box and a dirty box."

Dr. Benkle received a Paycheck Protection Program loan during the spring. He also had a risk assessment done by Stearns Bank to see what the future holds for him. He already was financing an OCT (Optical Coherence Tomography) with Stearns Bank, so creating a more complete relationship made sense for him. The OCT machine, which is very similar to an MRI machine, helps diagnose diabetes and glaucoma with high definition imaging.

"I was panicking about my payments I had to make when I had to close," Dr. Benkle said. "My bigger OCT machine was financed with Stearns Bank. Before I could get in touch with them, they called me. I was so surprised because it had been on my mind. I signed a revised deferred payment agreement and it was simple to do."

Dr. Benkle had his other OCT machine financed with another financial institution. That experience wasn't as pleasant for him.

"Stearns Bank proactively reached out to do help me in my time of need," he said. "The other bank, a large national bank, did not. It was impossible to get someone on the phone. It took almost a month before I got everything finalized. It took a day with Stearns Bank. That's why I would recommend Stearns Bank to anyone in the optical industry."

An Eye Toward The Future

Dr. Benkle, 64, has owned his own practice for 37 years. He's never experienced the issues he's faced since March 2020. The pandemic has been hard on him professionally, but he's trying to see some silver linings.

"My wife has been a registered nurse for 24 years. When I was at home at first, she was too. We were both home for 14 days in a row at one point. Getting to spend that time with her meant a lot," he said. "Normally, we take an international trip and go on vacation every fall. That's not happening this year, but that's OK."

Dr. Benkle's hope for the rest of the year is that his practices can stay open. He feels even when a vaccine comes through, that it won't become readily available for some time.

"As a country, we need to do better. I know every one of us is stressed out, but we need to work together as a nation to bring ourselves back from this," he said.

His best advice to his fellow optometrists is form partnerships wherever possible with their colleagues.

"Try to share some costs if you can," he said. "As a doctor who has been in California for many years, the costs of running a practice are always high. Sharing and communicating with each other is important.

"Find an optometrist in your area and see if there are ways you can partner up on marketing, social media or other offerings to patients. Helping each other is more important than ever."