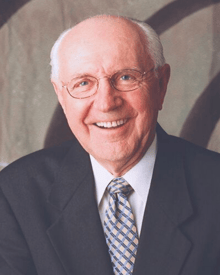 St. Cloud, Minn. (October 27, 2021) – Stearns Bank National Association today announced that Norman (Norm) Skalicky, Chairman of its Board of Directors and the Boards of its holding company and affiliate banks, will be retiring and transitioning to Emeritus status, stepping away from active participation in the organization. New board chairs will be announced in upcoming months for the various company boards of directors.

Skalicky founded what would eventually become Stearns Bank, N.A. in 1966 by acquiring a small state-chartered community bank in Albany, Minnesota, and swiftly acquiring another local bank to merge into a national charter with total assets of $7.5 million. Today, the organization has grown to more than $2.2 billion in assets with coast-to-coast business, consistently achieving year-over-year top rankings as one of the highest performing banks in the nation.

Kelly Skalicky, President and CEO of Stearns Bank, said, “The impact that Norm has had not only on the organization but in the greater community is legendary. He redefined community banking, developing a nationwide lending platform using the most advanced technology at the time – the landline phone and fax machine – long before branchless banks and fintechs became a part of the banking industry lexicon.”

Skalicky added, “Norm is a true innovator who infused our company with entrepreneurial spirit and a culture of success. He exemplified our trademark ‘We Get the Job Done’ motto with his drive and determination to find a way to get deals done. Norm has raised the bar for all and is held in the highest regard throughout the banking and financial industry.”

Three critical business priorities have been constant throughout Norm Skalicky’s career: Continuous change and innovation, speed and ease of delivery, and personalized customer service. In 1976, he created a financial leasing operation that has grown to become one of the industry leaders in equipment finance, with thousands of repeat customers in the agricultural, construction and medical industries. Skalicky believed a company never arrives and needs to continuously evolve, always learning, making changes and innovating to grow and prosper. In 1984, Skalicky formed an employee stock ownership plan that today owns 23 percent of the organization, with Stearns Bank’s more than 425 employee-owners vested and delivering for customers with speed and personalized service.

With Norm’s focus on maintaining strong capital – two times greater than its peers – and a bullet-proof balance sheet, Stearns Bank was better prepared when the financial markets crashed in 2008. The bank was well-positioned to assist the FDIC with failed banks, managing 10 transactions with the FDIC to take on over $2.1 billion in assets and $1.5 billion in deposits from failed banks in 2009 through 2012, expanding the bank’s footprint in Arizona and Florida.

Skalicky instilled a culture of urgency and tenacity to deliver a wow-factor to the customer experience. As a business owner himself of a small, growing bank, Skalicky understood how precious time was to business owners and that every business has unique needs. He committed Stearns Bank to make fast decisions, provide customized financing and answer incoming calls on the first ring to ensure business owners could talk directly and immediately to their banker. Being available and easily accessible through phone calls and in-person visits reinforces a personal connection that Skalicky felt was crucial to personalized customer service for business owners.

Skalicky has been recognized nationally for his achievements and leadership in the industry. During his tenure at Stearns Bank, the organization has consistently been among the best performing banks based on return on equity and return on assets, often being named the top performer in the country. Additionally, the organization has been recognized by the American Banker, Independent Community Bankers of America, Monitor 100 (equipment financing), and the Star Tribune for performance and excellence.

Minnesota-based Stearns Bank National Association is a $2.2 billion, independently owned financial institution with locations in Minnesota, Florida and Arizona, and over 35,000 small business customers nationwide, in every state across the U.S. Recognized as having a bullet-proof balance sheet with 20% capital and earning top rankings as one of the nation’s highest-performing banks by American Banker, and most recently ranked ninth in the U.S. among banks having more than $1 billion in assets by Independent Banker’s May 2021 Best of the Best ranking of banks with the highest 3-year average return on assets, Stearns Bank specializes in nationwide commercial construction lending, USDA and SBA lending, and small business and equipment financing. Driven by a passion to help others achieve their greatest ambitions, Stearns Bank's mission is to Get the Job Done! For more information, visit StearnsBank.com.