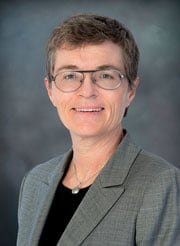 One year after her successful transition to president of Stearns Bank N.A., Kelly Skalicky has been named CEO of the company. She succeeds her father, Norm Skalicky, as chief executive officer. Norm Skalicky will maintain his position as chairman of the board and remain a vested member of the Stearns Bank family.

Norm has led Stearns Bank since 1964. Under his leadership, Stearns Bank has achieved nationwide recognition for excellence, including twice being named the #1 Top Performing Bank in the Nation by American Banker Magazine. Together, Norm and Kelly have built a culture at Stearns Banks that is as committed to its employees as it is to business growth.

“It is a privilege to take on this new role. I’m humbled to accept this leadership position in our family’s company that has been instrumental in my life and the foundation of my entrepreneurial drive,” said Kelly Skalicky. “I’m thrilled to continue to work alongside our talented, ambitious team to innovate and excel as one of the nation’s strongest, well-capitalized and highest performing banks.”

2019 promises to be a big year for Stearns Bank, with new initiatives in online platforms and deposit programs. These initiatives include an expanded focus on customized financing within niche and growth markets. Business customers can also look forward to a new suite of products to help manage their money and cash flow, all from one convenient digital platform.

Kelly has accumulated a lifetime of experience and knowledge about the banking industry. Her involvement with Stearns Bank dates back to her childhood, when she spent Saturdays at the office with her dad, using stationary to “play banker”. After graduating from law school, Kelly served as legal counsel to the bank. Seven years ago, she came onboard full-time, serving on the board of directors and as general counsel until her promotion to president last year.

“I have full confidence in Kelly’s ability to lead Stearns Bank. Passing the torch to my daughter is personally so rewarding for me and a natural progression for both Kelly and the business,” said Norm Skalicky. “As a father, it has been my greatest pleasure to watch Kelly grow into the leader she is now. I speak for myself and for everyone at Stearns Bank when I say, she can certainly get the job done.”

About Stearns Bank | We get the job done!®
Minnesota-based Stearns Bank National Association is a $2 billion, independently-owned financial institution with locations in Minnesota, Florida and Arizona, and over 33,000 small business customers nationwide, in every U.S. state. Recognized as the #1 performing bank in the nation by both American Banker and Independent Banker magazines, Stearns specializes in small business lending and equipment financing. Driven by its mission to deliver outstanding personal service, fast decisions and customized finance solutions, Stearns gets the job done! For more information, visitStearnsBank.com.